Hooray for Hollywood Podcast: Tom Johnson talks with John Barbour, the creator and host of Real People, but also the only person to win Emmy awards in both news and entertainment 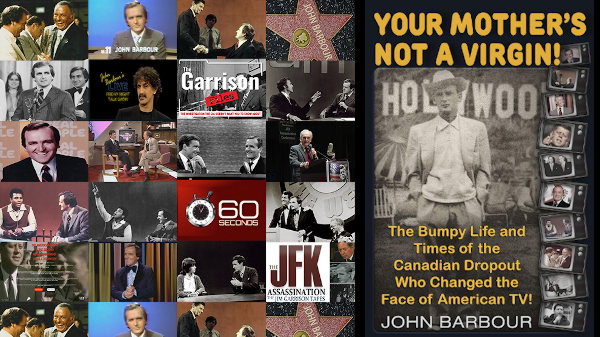 Jon Barbour has had a more than five decade career in which he created reality TV and interviewed Cesar Chavez. Images courtesy John Barbour.

John Barbour is a groundbreaker.

Sure, you can blame him for the Kardashians, if you like, since he is widely recognized as the innovator of reality TV as a host and co-creator of Real People in the 1970s. But John Barbour was also a well known local television reporter. During his stint on local television in Los Angeles he interviewed Cesar Chavez, among others.

Later, Barbour got into filmmaking, writing and narrating Keith Burns' documentary Ernie Kovacs: Television's Original Genius. He also directed and wrote the 1992 documentary, The JFK Assassination: The Jim Garrison Tapes. The film won an award in 1993 at the San Sebastian Film Festival in Spain.

He later directed and wrote, The American Media And The Second Assassination of President John F. Kennedy.

He has had an interesting life, for sure, and as he tells Tom Jonson in this version of the Hooray for Hollywood Podcast, even though Cary Grant and Charlie Chaplin had interesting lives and had biographies “Their books are not even a tenth as interesting as mine.”