The Velocity Of Ann-Margret

The Ever-Sexy And Ever-Hyphenated Ann-Margret Is Addicted To Speed, She Said At The TCM Film Festival, Party Inspired By Her Rural Upbringing But Also Marlon Brando In One Of His Most Iconic Roles 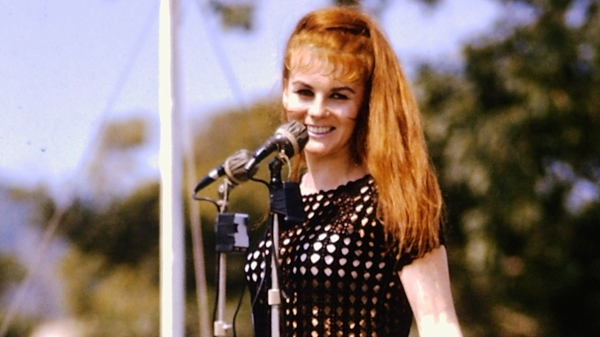 Ann-Margret in Vietnam, 1966. Image by James Salvas and used under the terms of a Creative Commons License.

At the TCM Classic Film Festival a couple of weeks ago, Ann-Margret told the audience gathered for a 50th anniversary screening of The Cincinnati Kid in which she starred with Steve McQueen, of her lifelong love affair with speed.

“Not the drug,” she peremptorily cautioned.

It seems that since she was a little girl growing up in the flyspeck village of Valsjöbyn, Sweden — population 160 then; 98 now — Ann-Margret couldn’t get enough of motorcycles or their velocity.

“My uncle rode bikes and when I was a young child, we lived very close to the Norwegian border so we’d travel from my village all the way over among the fjords and mountains,” she said. “I loved it, and later when I saw The Wild Ones with Marlon Brando, it just blew me away. I had to have a motorcycle. My father owned an Indian motorcycle, so he really couldn’t say anything when I wanted one of my own.”

Whether on the Harley-Davidson (lavender with daisies painted on it) she still rides, or in movies like Bye Bye Birdie, Viva Las Vegas, or The Cincinnati Kid, Ann-Margret, who turns 74 at the end of the month, has a knack for making men’s hearts race. And perhaps nowhere are her wiles more front and center then as bad girl “Melba” in The Cincinnati Kid, which remains one of the greatest card-playing movies ever.

Prior to filming, Paramount Studios told Ann-Margret and McQueen that they couldn’t ride their motorcycles to work or they wouldn’t be insured.

“Steve had such animalism; he was like a cobra,” she said. “Like me, he loved speed. I was single then and rode a Triumph 500. I could identify with him because I’m a bit of a daredevil too. I love a little bit of danger and he felt the same. I remember Steve told me: ‘Let them stay nervous, that’s their job.’”

Indeed, Ann-Margret admitted with pride that the fastest she’s ever gone is 120 mph, at 2:00 a.m. on L.A.’s Mulholland Drive (a serpentine roadway which boasts almost as many curves as she does).

Ann-Margret said that she was cast in The Cincinnati Kid after a meeting with then-director of the film, Sam Peckinpah. About two weeks later, she learned that Norman Jewison had taken over the reins because Peckinpah had wanted to shoot the movie in black and white, like a Western.

“But a movie where you show cards all the time wouldn’t allow the audience to distinguish between the red and black cards in the poker scenes,” she said. “That would’ve been a bit of a problem.”

Ann-Margret said that she never watches her movies and has seen The Cincinnati Kid just once in the last 50 years. She has better things to do, she said, like taking care of Roger, her husband of 48 years and, every once in a while, “caning it” on her Harley just to prove she still can.

Tom Johnson has been an entertainment journalist for more than 30 years and co-authored the 2004 book, Reel to Real: 25 Years Of Celebrity Profiles From Vaudeville To Movies To TV with David Fantle. He is also a former senior editor for Netflix.