McGurk: Be Skeptical of Mideast Peace

Former U.S. Diplomat to Bush, Obama and Trump says dismissing Iran’s capabilities is a mistake, and also reflects on his Sept. 11, 2001 as clerk to Rehnquist 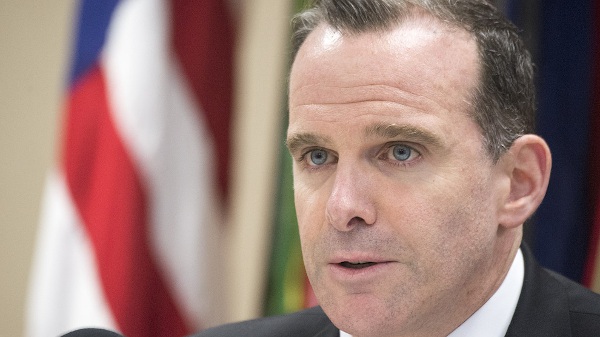 Brett H. McGurk during a press conference following the 2017 Chiefs of Defense Conference at Fort Belvoir, Va., Oct. 24, 2017. Image courtesy Chairman of the Joint Chiefs of Staff and used under the Creative Commons Attribution 2.0 Generic license.

Former U.S. diplomat Brett McGurk — a mideast uber-specialist —  revealed at a public talk at San Diego State University earlier this month that diplomacy and allies are needed to address Iran issues, adding Middle East issues should be at the forefront of the 2020 presidential race.

With an unpredictable and inexperienced president – who’s facing possible removal from office -- at the helm of U.S. foreign policy, it’s vital that the U.S. have a full plan to deal with new military threats, McGurk said.

He said after Trump was elected, he claimed to have a “secret plan” to defeat ISIS, but his team didn’t engage with the outgoing Obama administration until six days before the 2017 inauguration. McGurk says agreed to stay with the new administration, but as time went on, it was pretty clear to him and his colleagues that they weren’t “going to get any more resources.”

And after Trump pulled the U.S. out of the arms control deal with Iran in 2018, that left two options: Either pressuring Iran to return to the table, or hoping the Iranian mullahs would be thrown out of power. In response, Iran started pushing back last year — those actions indirectly led to the 2019-20 Persian Gulf Crisis.

McGurk described the recent assassination of Iranian Gen. Qasem Soleimani as “justice,” because he was a malevolent actor who harmed American soldiers. However, Soleimani’s death brought Iran and the United States perilously close to war, and the U.S. “needs to be ready for what’s coming,” McGurk added.

"If we leave (Iraq), ISIS and Iranian militias will fill the gap – and so will Russia. It will be a major setback." Former U.S. diplomat Brett McGurk

McGurk also said he would ask an incoming president about what his or her strategy is, adding it’s best to be skeptical of an elected official’s proposals when it comes to the Middle East.

“The lesson again is ‘back to basics,’” McGurk said. “With Iran, there needs to be a diplomatic situation … We have to get back to the table with the Iranians. Without our allies, there’s really no hope."

Today, the political situation in Iraq — as evidenced by recent demonstrations by citizens upset over governmental failures — has become more patriotic than sectarian, “and that is up to us to nurture,” McGurk said. Remaining in Iraq means “we can keep these problems in a box.”

He added the Department of Defense’s recent letter to Iraq regarding troop removal was a “blunder,” and criticized Trump for giving up any leverage “overnight” the U.S. had in Syria. “If we leave (Iraq), ISIS and Iranian militias will fill the gap – and so will Russia. It will be a major setback.”

Currently, McGurk is the Frank E. and Arthur W. Payne distinguished lecturer at Stanford University’s Freeman Spogli Institute. He was appointed Special Presidential Envoy for the Global Coalition to Counter ISIL by President Barack Obama in October 2015 and held that role until resigning in the wake of President Trump's decision to withdraw troops from Syria on Dec. 22, 2018.

McGurk earlier served under President George W. Bush as Special Assistant to the President and Senior Director for Iraq and Afghanistan, and under President Obama as Special Advisor to the U.S. National Security Council and Senior Advisor to the U.S. Ambassador to Iraq. McGurk served as a law clerk to Supreme Court Chief Justice William H. Rehnquist during the Court's 2001 October term.

McGurk also took the audience through a timeline of U.S. foreign policy in the Middle East since 2001.

McGurk said when he landed in Baghdad on a very cold day in 2003, the main highway from the airport “looked like something out of a ‘Mad Max’ movie.” It was a sign that the occupation wasn’t going well.

Unlike his father during the 1991 Gulf War, President George W. Bush didn’t build a strong enough coalition to deal with what came next after U.S. forces removed Saddam Hussein from power, McGurk said.

“The plan never adapted,” McGurk said, adding that Bush struggled with the occupation and wanted to trust his chain of command.

It wasn’t until 2006 that Bush decided on a troop surge to help calm a nation beset by sectarian violence and attacks on U.S. soldiers by insurgents. He praised Bush for being “the most hands-on commander-in-chief” who held daily meetings.

By the time Barack Obama was inaugurated in 2009, Iraq was in decent shape, and the new president felt the current plans were working, McGurk said. However, with the Arab Spring in 2011, Obama “got himself into trouble,” McGurk said. After the Syrian civil war began, the Obama team decided leader Bashar Assad had to go. The situation worsened when both Iran and Russia got involved, then a new malevolent threat appeared: the Islamic State, or ISIS.

The last thing Obama wanted was a greater military campaign, “and you can’t blame him,” McGurk said. Still, the president greenlit a greater offensive. McGurk wasn’t as critical of Obama’s much-ridiculed “red line” about Syria (connected to possible military action), but did fault the former president for not doing more to defeat ISIS sooner. Further, the U.S. could more closely work with Interpol to catch active ISIS members or those wanting to join.

To lessen the damage, McGurk said a “GI Bill for diplomacy” is needed. “It’s going to take a long time to replenish those ranks.”

Karen Weil is editor-at-large for Modern Times Magazine. To reach her, SEND AN EMAIL to kweil@moderntimesmagazine.com.