Unlimited Arts Calendar: Catch the fringed and masked cowboy Orville Peck or take a trip down memory lane with Chicago or The Glenn Miller Orchestra 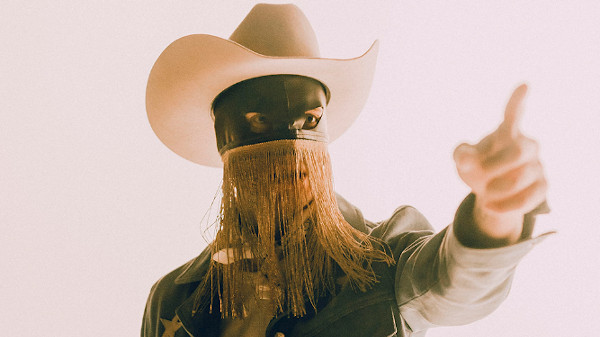 Get a “spring” in your step this spring with the plethora of great events available in the Phoenix metro this coming week.

Whether it be M3F (formerly known as the McDowell Mountain Music Festival) or a theater show or blues from Tinsley Ellis or Buddy Guy, there is something for everyone.

Or, check the masked wonder, Orville Peck. He once had his picture taken with some Kardashians, after all.

THIS WEEK
March 6 to 8
The name may have changed a little bit, but M3f will still rock, roll and rhyme. (It used to be the McDowell Mountain Music Festival.) Three days, three days! Headliners are Bon Iver and Rufus Du Sol, but there are dozens of other bands. Margaret T. Hance Park, 67 W. Culver, Phoenix.

March 6, 7, & 8
Dude, the classics! Beethoven, Haydn and ... Cerrone. Well, Beethoven and Haydn are classics and we’ve been told young American composer Christopher Cerrone might one day be thought of in the same light — without silk suits and wigs, we assume. Phoenix Symphony Hall, 75 N. Second St., Phoenix. The featured performer is Israeli pianist Shai Wosner.

Saturday, March 7
Thirty-five years after the release of Pee-wee’s Big Adventure comes .... a 35th anniversary screening of Pee-wee’s Big Adventure. But, now, the film will be followed by stories about the making of the movie told by Paul Reubens. Oh, and if you want to bring a cellphone to the show, know it will have to be secured in a bag you get to keep and if somehow you get caught with a cellphone in the venue that’s not locked in a bag, you will be ejected. Yeesh!

CaZo Dance Theatre, a kinesthetic dance theatre that tells full-length dance stories, is holding its annual fundraiser at 7 p.m. on the Studio South Terrace at Mesa Arts Center, 1 E. Main St., Mesa. The event will include live painting demonstrations from Sentient Tattoo, aerial performers, refreshments from Bertha's Cafe and Pita Jungle, a silent auction and a sneak peak of their next show, "Fate."

Want to learn more about the indigenous people's of the West? Native Trails takes audiences on a cultural journey to the First Nations of Arizona and North America through music, dance, and art. These performances highlight traditional instruments, colorful dances, and customary attire to share the stories of Southwestern tribes, including the Hopi, Diné (Navajo), Hualapai, and San Carlos Apache. Noon to 2 p.m., Scottsdale Civic Center Park, 3939 N. Drinkwater Blvd., Scottsdale.

Sunday, March 8
Big bands may no longer be the most popular music choice in the world right now, but they are still wildly entertaining and the tunes will likely stay with you for weeks after. So why not check out a big band with a huge legacy (since 1938) from 2 to 4 p.m.: the Glenn Miller Orchestra. Virginia G. Piper Theater, 7380 E. Second St., Scottsdale.

Monday, March 9
What do you get when you mix an over-the-top country look combined with a fringed “Lone Ranger” mask? Orville Peck, of course. Yes, there is some music there — a bit like Chris Issak meets Twin Peaks — but it's the look that is getting all of the attention. Check it out 8 p.m. The Van Buren, 401 W. Van Buren St., Phoenix.

Tuesday, March 10
Thundercat, aka Stephen Lee Bruner, first got famous as a member of crossover thrash band Suicidal Tendencies. Since then, he has released four solo studio albums and worked with Flying Lotus and Kendrick Lamar. Check it out 8 p.m., The Van Buren, 401 W. Van Buren St., Phoenix.

Wednesday, March 11
Tinsley Ellis brings the electrified blues wherever he goes and he almost always finds a raw and true sound born only from the blues ... and a Les Paul. Musical Instrument Museum, 7 p.m.

Thursday, March 12
Although there is only one original member left in the band, War is legendary and there are very few outfits that have the capabilities to deliver their signature style and sound. So, even if you don’t have a lowrider, or if you spilled the wine, head over to the Gila River Resort Wild Horse Pass, 5040 Wild Horse Pass Blvd., Chandler, at 8 p.m.

March 12 to April 12
My Son The Waiter, A Jewish Tragedy. Do we need to mention it is a comedy? Not likely. The show is based on the life of actor/comedian Brad Zimmerman, who moved to NYC and for 29 years was a waiter, but now has this show. Herberger Theater Center, 222 E. Monroe St., Phoenix.

March 13 to April 19
Set amidst the decade of the roaring twenties, Chicago is the story of Roxie Hart, a housewife and wannabe nightclub dancer who maliciously murders her on-the-side lover. Arizona Broadway Theatre, 7701 W. Paradise Lane, Peoria.

Friday, March 13
Flogging Molly is back! That’s right, Flogging Molly will once again be in the Phoenix metro around St. Patrick’s Day. This time, the show is at 7:30 p.m. at Harrah’s Ak-Chin Casino, 15406 N. Maricopa Rd., Maricopa.

Buddy Guy. We shouldn’t have to mention anything else and the house should be packed. But, just in case, realize Buddy Guy is likely the greatest living blues man. ‘Nuff said? We thought so. Chandler Center for the Arts, 250 N. Arizona Ave., Chandler.

This one gets a little confusing because the man who will be doing the presenting has the last name of Phoenix. Surely, Phoenix will be mentioned, but it is more a showcase of Americana and mid-century architecture. Author Charles Phoenix will present a slideshow of eye-popping space age style, car culture, tourist traps, roadside attractions, fun foods, local lore and much more in "The Mid-Century is My Muse!" Phoenix Center for the Arts, Third Street Theater, 1202 N Third St., Phoenix.

American Longspurs, The Melroses, Michael and the Pentecost will deliver Willie’s Roadhouse: A Tribute to Willie Nelson at 8 p.m. at The Rebel Lounge, 2303 E. Indian School Rd., Phoenix

ONGOING
Until March 8
Bringing Broadway to the Sonoran Way, ASU's Gammage, 1200 S. Forest, Tempe, is hosting a 2018 TONY Award winner, Once on This Island. The story is a universal tale of a fearless peasant girl in search of her place in the world who is ready to risk it all for love.

Until March 14
Night Of The Chicken: Revenge of the Angry Booger by Carrie Behrens is happening at Space 55, 1524 N. 18th Ave. in Phoenix. This Zoni-winning radio play focuses on a young girl who deals with the twin horrors of junior high and being a “Werechicken” (as part of a family-friendly series). Showtime is 7:30 p.m. Tickets are $10 for students or $20 for adults.

Until March 22
The classic Tony-winning musical La Cage aux Folles, created by the legendary Broadway composer Jerry Herman, will run through March 22 at the Arizona Broadway Theatre, 7701 W. Paradise Lane in Peoria. All tickets can be purchased through the ABT Box Office by calling 623-776-8400 or online.

March 14
The Music of Cream
Burlescapades

March 18
Off With Their Heads

March 27 to 29
Tempe Festival of the Arts

March 30
Rage Against The Machine