Louis C.K. Comes, Maher Too, And Tributes Galore in PHX

Unlimited Arts Calendar: Legends in Jazz and classic pop, live theater, Brazilian Carnaval and much more is happening in February in the Phoenix metro 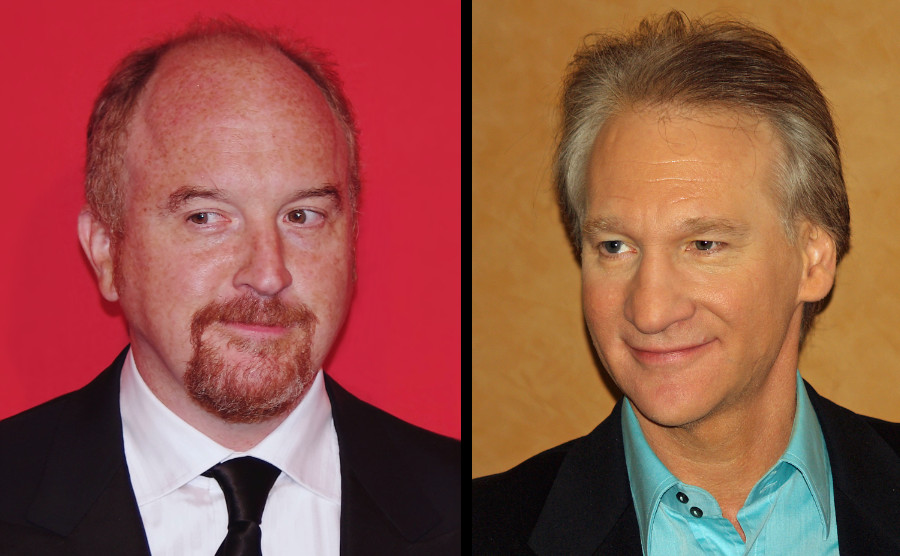 Louis C.K. (left) and Bill Maher (right) will both make appearances in Phoenix this week. Images by David Shankbone and used under the terms of a Creative Commons Attribution 3.0 Unported license.

He’s been hailed and wailed, but Louis C.K. is on the road and will make three appearances in Phoenix this week.

But the biggest block of entertainment options this week is undoubtedly some of the great tributes that will be presented to Phoenix audiences.

More than fifteen years after his death, Ray Charles’ incredible legacy lives on. Georgia on My Mind: The Music of Ray Charles will be presented Friday at the Chandler Center for the Arts. The Grammy-winning musical celebrating the one-and-only Carole King, Beautiful is being staged starting Friday at the Arizona State University Gammage.

Lastly, a tribute to Ella Fitzgerald will be presented from 9 a.m. to 5 p.m. Saturday and Sunday (Feb. 22 and 23) at the Musical Instrument Museum. There will be performances, a microphone craft, and documentary screenings showcasing the life of the “Queen of Jazz.”

Or, catch a couple of the great young performers that will grace stages (for more details, peruse below).

As always, there’s something for everyone and nothing for no one in this week’s Unlimited Arts calendar.

THIS WEEK
Friday, Feb. 21
Classical crossover group Simply Three will perform at 8 p.m. at Mesa Arts Center. The trio play a range of genres and artists, from Gershiwn to Adele. Tickets range from $30 to $38.

More than fifteen years after his death, Ray Charles’ incredible legacy lives on. Georgia on My Mind: The Music of Ray Charles will be presented at 7:30 p.m. Friday at the Chandler Center for the Arts, 250 N. Arizona Ave. Admission starts at $38.

America’s harsh political truth-teller and comedian is heading to Phoenix: Bill Maher is playing the Arizona Federal Theatre. Showtime is 8 p.m., and tickets start at $68.

The Phoenix Chorale’s Valley Sing will happen at 4 p.m. at MCC Performing Arts Center, 1520 S. Longmore in Mesa. Partnering with the Phoenix Girls Chorus, the Phoenix Boys Choir and Mesa Community College, Valley Sing “is designed to build community through song, bringing together friends and neighbors from across the Valley of the Sun for the fun and joy of singing.” Admission is free.

Grammy-nominated funksters Stefon Harris and Blackout will take the stage at 8 p.m. at the Scottsdale Center for the Performing Arts, 7380 E. Second St. (Fans have the opportunity to watch them do a sound check.) Tickets start at $35.

Arizona Young Artists Competition will get underway at 7 p.m. at the Herberger Theater Center, 222 E. Monroe St. in Phoenix. Aspiring young performers, in various artistic fields, between the ages of 15 and 20 compete for a chance to take home top honors. The winner will be chosen by a panel of judges and will be offered an opportunity to perform with the Arizona Broadway Theater professional cast in a Main Stage production. Admission is $5 or $10.

Feb. 22 to 23
A tribute to Ella Fitzgerald will be presented from 9 a.m. to 5 p.m. Saturday and Sunday at the Musical Instrument Museum, 4725 E. Mayo Blvd. in Phoenix. There will be performances, a microphone craft, and documentary screenings showcasing the life of the “Queen of Jazz.”

Feb. 26 to March 1
The production Sondheim On Sondheim, focusing on the famed Broadway composer, is happening at the Judith Hardes Theatre, 100 E. McDowell Road in Phoenix. Showtimes and ticket prices vary.

Thursday, Feb. 27
Hot Snakes and Kills Birds are playing The Rebel Lounge, 2303 E. Indian School
Road in Phoenix. Twin Ponies is another opening act. The show will start at 9 p.m., with tickets ranging between $26 and $30.

Feb. 27 to March 1
We want to be like them: The Jungle Book is being presented by the Arizona School for the Arts at the Herberger Theater Center. Showtimes are 2 p.m. and 7 p.m.; admission is $13.20.

Feb. 28 to March 1
Phoenix Chorale Presents “Cosmos” at three locations in Central Phoenix, Paradise Valley and West Valley. This production “takes us on an interstellar journey through cultures both ancient and modern, using musical styles from around the world and across the ages.” Admission ranges from $15 to $37. Click the link for addresses, showtimes and other info.

Friday, Feb. 28
It’s time to samba: A Celebration of Brazilian Music is happening at 8 p.m. at the Crescent Ballroom, 308 N. 2nd Ave. in Phoenix. This celebration of the Brazilian carnaval will feature numerous performers. Admission is $15.

America’s leading Latino dance company, Ballet Hispánico will perform at 8 p.m. at the Scottsdale Center for the Performing Arts. Tickets range from $19 to $55.

Saturday, Feb. 29
For nearly 40 years, he’s been a major force in jazz music. David Sanborn Quartet will perform at 7 p.m. and 9 p.m. at the Musical Instrument Museum. Admission starts at $38.50.

Sixty years ago, he made his world premiere on The Ed Sullivan Show. Violinist Itzhak Perlman will celebrate his 75th birthday at the Mesa Arts Center, One E. Main St. Rohan de Silva will accompany him on piano. The show starts at 8 p.m., while ticket prices range between $55 and $110.

ONGOING
Feb. 21 To March 14
Night Of The Chicken: Revenge of the Angry Booger by Carrie Behrens is happening at Space 55, 1524 N. 18th Ave. in Phoenix. This Zoni-winning radio play focuses on a young girl who deals with the twin horrors of junior high and being a “Werechicken” (as part of a family-friendly series). Showtime is 7:30 p.m. Tickets are $10 for students or $20 for adults.

Until Feb. 23
Continuing their fine work, Black Theatre Troupe will present Trouble in Mind for most of the month. The story was written by Alice Childress and presents the story of a progressive, 1950s theatre company preparing to open a misguided new play on Broadway. Check the link for times and dates for performances at the Helen K. Mason Performing Arts Center, 1333 E. Washington St., Phoenix.

The musica true storyl Americano focuses on Tony, the child of immigrants who discovers his undocumented status when he tries to enlist in the Marines. (It’s based on the life of Antonio Valdovinos.) Click the link for showtimes and ticket prices.

Those crazy rumors about Area 51 just might be true: The play Space Mission #5379: Saving Rachel Nevada is running at the Mesa Arts Center, One E. Main St. Tickets are $15; showtimes vary.

Until Feb. 28
The classic Tony-winning musical La Cage aux Folles, created by the legendary Broadway composer Jerry Herman, will run through March 22 at the Arizona Broadway Theatre, 7701 W. Paradise Lane in Peoria. All tickets can be purchased through the ABT Box Office by calling 623-776-8400 or online.

Until March 1
Elephant & Piggie’s “We are in a Play!” presented by Childsplay Theatre, focuses on two critters who sometimes face tough questions. What do you wear to a fancy party? Should you share your ice cream? This musical is being staged at the Herberger Theater Center, and is open to kids 3 and older. Admission ranges from $12 to $35; showtimes vary.

Athol Fugard’s “Master Harold”... And The Boys, about a tea shop in 1950s South Africa, is being staged at the Herberger Theater Center in Phoenix. Tickets start at $40 and showtimes vary.

March 2
Light Your Corner of the World

March 3 to 8
Once on the Island

March 12 and April 12
My Son The Waiter, A Jewish Tragedy

March 14
The Music of Cream