Unlimited Arts Calendar: Arizona and Phoenix are once again bombarding the arts and entertainment season with a variety of great music and theater 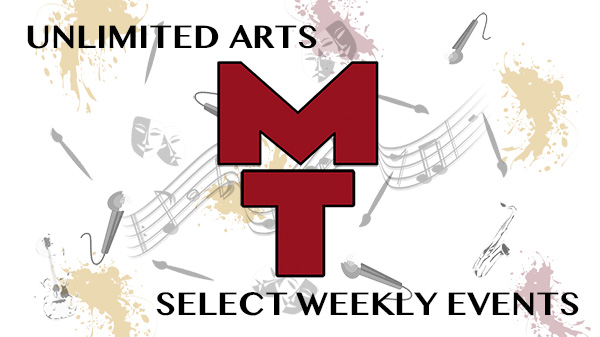 Many areas around the country have great arts communities, but Phoenix is perhaps more flush with great arts events during the three months after a new year as any other.

Sure, the big coastal cities — Chicago, New York, Los Angeles and San Francisco — are standard bearers for American arts, but each Spring there are hundreds of great things to do in the Phoenix metro and throughout the state.

In the last two weeks of January, there are appearances by national entertainers of note, including Juliana Hatfield and Patton Oswalt, but there are also great community theater events, including Kunstler at The Herberger Theater Center, 222 E. Monroe St. in Phoenix.

Or, check out Respect The Underground, the 8-year celebration of the Pressroom.

Regardless, there is much to do, but so little time.

When it comes to soul/R&B legends, this duo is hard to beat: The Temptations and the Four Tops will play the Arizona Federal Theatre, 400 W. Washington St., Phoenix. For over a half-century, both groups have had dozens of classic hits and performed for millions around the world. The show will start at 8 p.m.; check the link for ticket prices.

Jan. 17 and 18
Formerly of the influential John Mayall & The Blues Breakers, veteran guitarist Coco Montoya will take the stage at The Rhythm Room, 1019 E. Indian School Road in Phoenix. His latest album is Coming In Hot.The show will start at 8 p.m.; admission is $18.

Saturday, Jan. 18
Magician and TV host Michael Carbonaro will perform at 8 p.m. at Talking Stick Resort in Scottsdale. Carbonaro launched into stardom with his numerous late night appearances and his hit comedic series, The Carbonaro Effect,  on truTV. Admission is $35.

Be a part of a new tradition by attending the first Nom Nom Noodles Festival. More than 12 local noodle and pasta businesses will supply this Asian-inspired food festival. Noodles and pastas include ramen, chow mein, alfredo, along with others from 6 to 11 p.m., The Pressroom, 441 W. Madison St. in Phoenix.

Jan. 17 to Feb. 1
The play Kunstler is being staged at The Herberger Theater Center, 222 E. Monroe St. in Phoenix. Written by Jeffrey Sweet, it focuses on the famed defense attorney (who defended The Chicago Seven) who delivers a seminar at a college campus, but a brilliant young student confronts him. Admission ranges from $11 to $27.50.

Sunday, Jan. 19
Peace and Community Day: 33rd annual Sunday A’Fair Concert Series will get underway at noon at Civic Center Park. Native folk and rock singer Darryl Tonemah, an award-winning musician, will perform. Along with free musical entertainment, this event will include interactive art activities for all ages.

For a bluesier way to celebrate January, check out Arizona Blues Hall of Fame Fundraiser and Induction Ceremony beginning at noon, Jan. 19 in The Rhythm Room, 1019 E. Indian School Road. Being inducted are Dave Riley/Bob Corritore’s Juke Joint, and The Rhythm Room itself. Numerous Hall of Famers will perform, including Andy Gonzales, Maria Moreno and Rocket 88s. The cover charge is $10.

Sunday, Jan. 19
And Then We Danced a film described as “a passionate coming-of-age tale set amidst the conservative confines of modern Tbilisi,” will be screened at 7 p.m. at the Scottsdale Center for the Performing Arts, 7380 E. Second St. This is part of the museum’s Talk Film series, which also features a discussion. Admission is $14.

Wednesday, Jan. 22
The beatiful beast is loose: National Geographic Live: Pursuit of the Black Panther with Shannon Wild will be presented at 7 p.m. at the Mesa Arts Center, One E. Main St. The appropriately named photographer chronicles her documenting a rare and elusive black panther in the dense forest in southern India. Admission ranges from $30 to $44.

Friday, Jan. 24
She started off as a ‘90s alt darling, but singer and guitarist Juliana Hatfield has endured.  She’ll perform at 7 p.m. at The Crescent Ballroom, 12 W. Camelback Road in Phoenix. Her most recent album is Weird, and she’ll perform fan favorites. Potty Mouth is the opening act.

An indie rock dance party featuring Electric Feels will kick off at 9:30 p.m. at the Rialto Theatre, 318 E. Congress in Tucson. Those over 18 may get down and boogie.

Respect The Underground, an eighth anniversary concert, will happen at 7 p.m. at The Pressroom, 441 W. Madison St. in Phoenix.

Jan. 24 to 26
Troupe Vertigo and the Phoenix Symphony will perform Cirque Cinderella at 7:30 p.m. at the Orpheum Theatre, 203 W. Adams St. in Phoenix. The production features an energetic score with aerialists, contortionists, hula hoops, strong men and jugglers. Tickets start at $37.

Jan. 24 to Feb. 2
The Tony-winning theater hit Spring Awakening is coming to Phoenix, running through Feb. 2 at the Stagebrush Threatre, 7020 E. 2nd St. This show deals with sexuality, trauma, grief and is not for young children, so parental discretion is advised. Tickets are $20.

Jan. 24 to Feb. 28
The classic Tony-winning musical La Cage aux Folles, created by the legendary Broadway composer Jerry Herman, will run through March 22 at the Arizona Broadway Theatre, 7701 W. Paradise Lane in Peoria. All tickets can be purchased through the ABT Box Office by calling 623-776-8400 or online.

The multimedia production Dancing Earth: Between Underground and Skyworld will be presented at ASU Gammage. The work “illuminates the practical, spiritual and cultural aspects of renewable energy.” Admission is $20.

Feb. 7 to 23
Back Theatre Troupe: Trouble in Mind