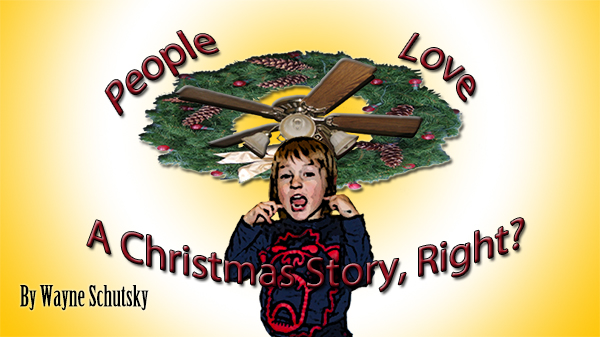 In this modern tale of holiday dreams, a young man tackles the complexities of Christmas, but what he learns is far more fundamental

Author's note: For my Dad, who taught me that there are more important things in life than stuff.

I couldn't really remember the phrase but I knew that I wanted to get my Dad the best Christmas present ever and I had no idea what that present was.

Oh, and it was Christmas Eve.

A heavy weight sat squarely in the middle of my chest and made my heart feel like a brick. I could feel the rhythmic pace of blood flowing out of my chest and into my whole body. The beat thumped in my temples.

I was 10 for god's sakes — 10-years-old. Double digits. I had hit the big time and I couldn't even find the perfect gift for my Dad, the guy who always gave me perfect gifts. This is the guy who tossed me a new glove on my birthday four months ago, right before the start of the little league season and the guy who bought me a new bike when the old one forced my knees to hit my chest when I pedaled.

When I turned 10, Dad told me I was growing up. I had no idea what that meant until a week before Christmas. And then, in the middle of a commercial for a new Lethal Weapon movie, mold remover or Nickelodeon Gak, it hit me.

Growing up meant that you couldn't rely on being a kid to skate by on your responsibilities. I could no longer hand my Dad a tie or hat or pen my Mom had bought along with a macaroni and construction paper card that I had made at school and call it a day. Sure, my Dad could still feign a smile that said aren't you cute to my little sister when she gave him that shit. But I was 10 — practically a grown man — and could not expect the same treatment.

There I was sitting on the top of my wooden-framed twin sized bunk bed in my blue Superman underwear without so much as a shitty card to give my Dad.

We stopped making cards at school in the fourth grade, which came as a total surprise to me on the last day before winter break. I showed up to school with my scissors, markers, and macaroni in tow only to find out that we were now too old for Christmas parties and card making. At least that is what my short and fat, curly-haired teacher said.

“You boys need to mature,” she chirped at my best friend and I when we complained about the lack of construction paper and Elmer's glue.

Her loose, grey, curls bounced in motion with her stomach. Even underneath a thick red holiday sweater we could see the bulge of her gut move up and down.

One of the blades from the ceiling fan whacked me in the side of the head and sent me face down into my flat old pillow. I lay there for a few seconds, feeling the dull pain throb on the side of my skull.

Most kids probably don't have to worry about decapitating ceiling fans during the holidays, I thought. But those kids don't live in Phoenix, where the mixture of 75-degree weather and heat emanating from the kitchen made fans a necessity because Dad refused to turn the A/C on in the winter.

I opened my eyes and looked into the fuzzy darkness of the pillowcase and then turned my body over and sat up because the pillow smelled salty — like sweat and hair.

I scooted over to the left side of the bed to avoid the fan and crossed my legs into what we used to call Indian Style (a name that struck me as inappropriate, even back then). I leaned my back against the white washed wall next to my bed and looked down and out the window.

Past the white metal blinds I could see a lizard crawling on the cinder block wall in my backyard. I had to shield my eyes with my hand because the orange dusky sun shot beams of blinding light at me over the top of the wall.

I turned back to face my bedroom and tried to think about something to get for my Dad. I scanned the room — looking at my tall oak dresser, the tiny television on a flimsy black stand, the array of action figures and books strewn across the floor — and tried to envision myself handing one of them to my Dad, all wrapped up nice on Christmas Day.

But it felt disingenuous. My Dad paid for everything I had in one way or another, so if he really wanted any of my stuff he probably would have just kept it in the first place.

I slid over my Ninja Turtle sheets and moved over my pillow to the ladder hanging off of the edge of the bed frame. I stood up on the first rung, keeping my neck arched to the right and out of the flight path of the fan blades.

I felt the urge to jump the six feet or so down to the ground but my inner pragmatist said I was too short to attempt that type of maneuver and my inner daredevil backed down.

I stood in the middle of my room and paced back and forth between the closet and my brother's short long rectangle dresser. I thought about what I should get my Dad, but continued to come up empty.

I simply could not resort to the old standbys any longer.

And then a brilliant thought popped into my head. And I stepped on a hard plastic Ghost Rider action figure with spring action and yelled shit and stopped silent to see if anyone heard me say that word and then went back to pacing.

I looked on top of my brother's dresser to see if he left his gift for Dad up there. I mean, he was a 13, so he must be used to this whole holiday pressure thing by now. He probably had a great gift idea.