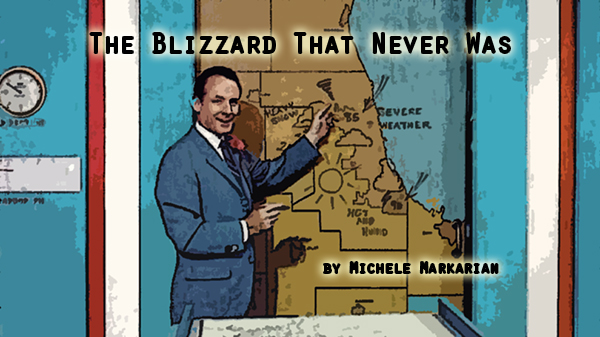 “Five minutes,” someone called. Kip deliberately mussed the top of Janet’s hair before leaving the room.

Tonight there was no swirly movement in the background for the big announcement, just a photo of snow with an overlay of what looked like a graveyard. The usual ominous music was absent. Jack always said to kill the music for the really big stuff – somehow its absence makes the news that much more portentous.

“Tonight we have word that perhaps there might be deadly chemicals in the snow,” said Kip. “Janet?”

“That’s right, Kip.” Janet made sure her voice was smooth and calm. “There is evidence that there are deadly chemicals in the snow. Experts are warning not to leave your homes until further notice unless it’s absolutely necessary. Children need to be indoors and away from sledding, skating and other outdoor activities, such as going to school. Kip?’

A lively galloping song rose like a miracle in the background. “In other news, the 49ers won this week’s game against the Redskins. More on that after this commercial break”.

Ed was beaming after the newscast. “The phones are ringing off the hook!”

Janet looked at the phone lines, which were ringing, but certainly not off the hook. “They are?”

“Sure.” Ed looked down at his iPhone. “Actually, people are doing that thing with the number sign – you know –“

“Get with the program, old man. Texting”, said Kip.

“Yeah, whatever. They’re testing off the hook.” Ed was so happy he could barely contain himself.

“What are they saying?” asked Janet.

“Ed, this isn’t good.” Bill Ling came striding in, holding his phone. “The scientific community is demanding some kind of explanation for the chemical snow.”

“I’m just saying, there’s a group now over at MIT who are questioning the whole thing –“

“Are they scientists, or reporters?” Ed roared. “Get Audrey in here.”

“What is it?’ said Audrey, who had heard the commotion from the next room and was cowering near her desk.

“The scientific community –“ Ed snarled that phrase sarcastically – “is demanding an explanation. What now?”

“Right,” whispered Audrey. She thought a minute. “We need a diversion. Something to distract.”

“No.” Audrey stood very still, but you could see the wheels turning. “A snow distraction.”

“I think I know where you’re going with this,” said Ed.

Ed practically jumped through the ceiling with joy. When in doubt, he always thought, throw in the child psychologist. That’ll throw helicopter parents off the scent of truth anytime. “Audrey, get her into the studio, STAT!”

“And tonight, how to talk to your children about potentially dangerous snow,” said Kip smoothly, during the intro. He was a little peeved. Ed suggested – no, demanded – that Janice do the interview with Dr. Pauline, as it was thought that women were more tuned in to other women when it came to their children.

“She doesn’t even have kids,” griped Kip in the dressing room to Giselle, pointedly ignoring Janice.

“Neither do you,” retorted Janice.

“What the heck does that mean?” asked Janice. “Look, you can do the intro, okay?” Janice liked Kip and didn’t want to ruffle any feathers, even though she was thrilled to be doing the interview – if you could call a two minute clip with a fourteen-minute buildup an interview.

“No kidding, doof”, said Kip, running both hands over the top of Janice’s hair. He ducked Giselle’s swat and hopped from the room.

Janice adjusted her skirt. “So Dr. Pauline, what’s the best way to answer any questions young children might have concerning the potentially dangerous chemical snow?” Janice was not sure why the network kept insisting on using the word potentially, but she usually did what she was told.

“Well, first of all, keep small children away from the television set during this difficult time. The images and expressions that they pick up could traumatize them, so you want to keep information to a minimum.” Dr. Pauline’s tone managed to be both upbeat and concerned.

“And what should you say to small children who want to play in the snow?” asked Janice, trying to approximate Dr. Pauline, but only sounding anxious.

“You can distract your kids by thinking of fun projects to do indoors, like bake snowman cookies or build a fort to shelter them from the cold. This way, you can tie in the outdoors with your indoor play.”

“Thank you so much for your sensible advice, Dr. Pauline,” said Janice, feeling better already.

Ed seemed subdued after the show. “What’s wrong? I thought that went really well,” said Audrey. “Dr. Pauline is always so comforting in a crisis.”

“She was fine,” grunted Ed. He didn’t want to tell his team that he was receiving e-mails from his competitors at the other stations, making fun of his chemically dangerous snow. Unbeknownst to the staff, two of the anchors at CBC had openly joked about the snow chemicals, saying that perhaps the reporters at “another station we know” sniffed them and it got to their heads. Even RGO was silent on the topic, and they were the ones who had introduced it.

Bill Ling came running in. “Ed, is Joe still in studio? It looks like a major storm is coming in from the Northwest. This could be huge.”

“Oh my God. Does this snow have chemicals too?’ said Janice. “Or does the fresh snow wipe it all out or something?”

“Ed, nobody is going to give a crap about chemical snow once this blizzard hits,” said Bill.

Ed’s face broke into a happy grimace. “Great! Team! Audrey! Put up the blizzard montage and some kind of heavy death march music in the background! We’ve got a blizzard on the way!”